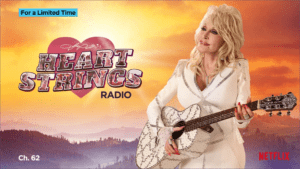 In the last few weeks, Dolly Parton has co-hosted the CMA Awards. Netflix has released its second major Parton collaboration in less than a year, the dramatic series Dolly Parton’s Heartstrings; (the first, the TV movie Dumplin’, featured her music and prompted a sales spurt, as did Ken Burns’ Country Music). As I write this, she’s being honored for her 50th anniversary with the Grand Ole Opry.

On the CMA Awards, Parton performed a medley that included both “God Only Knows,” a collaboration with Christian duo For King and Country that is now being worked to Country, as well as “Faith,” a reworking of John Hiatt’s “Have a Little Faith in Me” with dance acts Galantis and Mr. Probz. That song is currently top 5 at the handful of stations comprising the dance radio chart, and it’s not mere stunt casting, since Parton’s first disco hit was in 1978 with “Baby I’m Burnin’.”

Even before last year, Parton’s “Jolene” was clearly part of pop culture, thanks to its frequent appearances on American Idol and The Voice. “Jolene” was a No. 1 Country hit in early 1974 that failed to cross to Top 40 radio. “Jolene” both defines and transcends “Classic Country.” Some might classify it as traditional because of its vintage, but “Jolene” is propelled by a bongo groove more reminiscent of R&B and pop hits of the time. Today, “Jolene” is beloved by numerous colleagues of mine who weren’t even born in 1974, and probably haven’t heard much traditional Country, unless they watched the Ken Burns special. (Or perhaps now that the podcast club in my office is listening to “Dolly Parton’s America,” produced by WNYC New York.)

It’s ironic that the first song I encountered on Dolly Parton’s Heartstrings Radio, which had a limited run on SiriusXM in November, was “Honky Tonk Songs,” a late ‘90s Parton single about drowning your heartbreak to a soundtrack of Merle Haggard and George Jones, because there were no such available songs by female artists. “Why don’t the women sing honky-tonk songs?” Parton asks.

In 2019, the song reads as a commentary on the lack of female artists at Country radio overall. In 1998, that was less of an issue, but the most prominent women at the format were Shania Twain, Faith Hill, and LeAnn Rimes, who were returning Country crossover acts to pop radio in a significant way for the first time in more than 15 years. Parton had remained a presence (if no longer a core artist) at Country radio in the Garth-dominated early ‘90s, but by 1998, even that had evaporated.

Ironically, Parton had been both a Country-to-Pop precursor to Faith and Shania and a purveyor of honky-tonk songs, almost simultaneously, as it turns out. In 1977, RCA finally got Parton a pop hit with the MOR’ish “Here You Come Again,” a song that’s most likable because Parton was. The Top 40 follow-up was the Muscle Shoals funk of “Two Doors Down,” but Parton had already given the Country hit on that song to label-mate Zella Lehr. So the Country hit, “It’s All Wrong, But It’s Alright,” is one of the great, archetypical barroom songs. (If you’ve seen Norma Rae, that movie’s singalong makes it official.)

That sort of versatility becomes readily apparent on the Sirius XM channel: a career retrospective that bounces from her (mostly traditional) Porter Wagoner duets to AC balladry to late-career eclecticism. In the ‘80s, after “9 To 5” and the Kenny Rogers duet “Islands in the Stream” had further expanded her pop radio footprint, CHR stopped playing Country crossovers a few months later, but Parton continued to experiment. Country radio was more enthusiastic about some songs than others, but 35 years later, the discoid “Potential New Boyfriend” and the icy synths of “Save The Last Dance For Me” (an arrangement that could have been on the Annie Lennox covers album) are of a piece, even if the latter was the bigger Country hit.

Broadcast radio hasn’t known what to do with Parton’s pop culture comeback — if it’s thought about it much at all. “Islands in the Stream” has the most presence at radio, thanks to the Breeze-driven resurgence of Soft AC, getting about 125 North American spins this week. “Hard Candy Christmas” isn’t quite the AC holiday standard it deserves to be, but it had enough presence between the holiday warhorses to get 100 spins last week, according to Nielsen BDSRadio.

Mainstream Country is a decade too new for even Faith and Shania these days, but Dolly’s Brad Paisley duet, “When I Get Where I’m Going,” also gets about 100 spins. It’s the Parton representation on iHeart Media’s gold-based Country outlets. It also gets significant spins on WSM-FM (Nash Icon 95.5) Nashville.

Much of Classic Country radio is unmonitored, but “9 To 5” got 94 spins last week, followed by 63 for “Jolene” and 54 for “Here You Come Again.” (The Whitney Houston version of “I Will Always Love You”—one reason that Parton probably isn’t sweating her own airplay much these days—had 268 spins in all formats.)

As for “Jolene,” even CHR listeners experienced that song as an almost-hit last year when goddaughter Miley Cyrus and Mark Ronson channeled it into “Nothing Breaks Like a Heart.” Given its profile with younger listeners, “Jolene” could probably work on AC and Classic Hits stations, but I know from discussions with pop program directors that the prospect of doing so is no less daunting than playing “Mule Skinner Blues” — not the Parton version, but the Jimmie Rodgers original.

That leaves satellite radio to do the thing that broadcast can’t easily accommodate. Here’s Heartstrings Radio at 8:15 a.m., November 25. All songs are by Parton solo, unless otherwise noted.