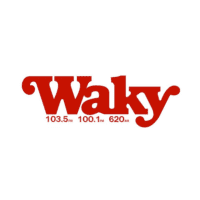 In the early years of the Ross On Radio newsletter, WAKY-FM Louisville, Ky., was a relatively consistent presence. One of the truly great AMs of the ‘60s and ‘70s, in a market with a unique hit music history, was being saluted by a suburban FM. Legendary former PD Johnny Randolph was in afternoons, while vintage jingles played between songs-not-always-heard-on-Classic-Hits-stations. Within a year, more traditional rival WRKA was gone (something that could easily have happened anyway in that era).

I haven’t written about WAKY recently. As an audio tourist, there were always new choices for Oldies stations that went beyond the safe list, even if most of them weren’t FMs in significant markets. Also, WAKY’s numbers weren’t published for many years. Last month that changed, and in the recently-released August ratings, the station was in the top 5, 12-plus, 4.7-5.5, putting WAKY ahead of both the Mainstream AC and the more traditional Classic Rock outlet. It’s now heard on three frequencies—thanks to the addition of an AM and a translator covering more of the city and Indiana suburbs.

The emergence, then endurance of “Heritage Oldies” as a subformat in general has been encouraging. AM outlets drawing on older music and vintage presentational elements have come and gone. But on FM, WTIX-FM New Orleans carries on, still playing songs not heard outside of that market. So does WIBG-FM Ocean City, N.J. There were murmurs about modernization when WLNG Eastern Long Island, N.Y., was sold, but it marches on, in defiance of time and radio law as well.

WAKY is centered in the ‘70s and still playing the ‘60s—more of them on the weekends. That’s how I remember them, but it’s particularly noticeable after a decade when the Classic Hits format is ten years newer. Randolph is still in afternoons. The music is still punctuated by PAMS and JAM jingles from the ‘70s (and on the ‘60s on the weekends). Promotionally, it feels like there’s more going on—there was an upcoming Dodge Journey GT giveaway and a tie-in with an annual bourbon festival. There was also an ongoing on-air promotional campaign—“The WAKY Generation”—with a lot of drops from listeners who remembered WAKY-AM.