“All I Want For Christmas Is You.” Or Not. 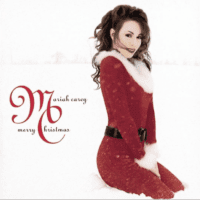 It’s not even Thanksgiving, but here’s what has already happened with Mariah Carey’s “All I Want For Christmas Is You” this holiday season:

I wouldn’t seek out “All I Want For Christmas Is You” on the radio. I don’t have to, any more than I have to make a concerted effort to hear “Girls Just Want To Have Fun” or “Every Breath You Take.” At holiday time, I can count on hearing it pretty quickly on any major AC station—more now that the original has been joined by Michael Bublé and Lady Antebellum in the Christmas music canon.

Like a lot of songs, “All I Want For Christmas Is You” just goes by me now. I have to work to re-create the joy of hearing it in 1994, when it was an exciting moment during a pop doldrums that offered few others. I already liked some of Mariah’s forays into classic soul—first she referenced the Emotions and “Best Of My Love” on the hit “Emotions,” then she sampled an Emotions B-side, “Blind Alley,” with “Dreamlover.” Now she was saluting Phil Spector’s Christmas album! She wasn’t just a heavily hyped competitor to Whitney Houston anymore. For a moment, she had actual music geek credibility (not to mention the foothold in Hip-Hop that “Fantasy” had given her).

It wasn’t yet apparent in 1994 that new additions to the Christmas canon were an endangered species. To some extent, having a new holiday song was a rite of passage for a superstar artist of the Elton John, Bruce Springsteen, or Paul McCartney caliber. But thanks to the “A Very Special Christmas” compilation as well as the surprise success of Neil Diamond and Amy Grant holiday albums, name artists were doing more covers and fewer originals. The last big originals—“Last Christmas” and “Do They Know It’s Christmas–were a decade earlier.

I might be indifferent to “All I Want For Christmas,” but I’m not irritated by it. So I was surprised by the British respondents. Usually, the “least joyous” polls hone in on novelties like “Grandma Got Run Over By A Reindeer” or “Jingle Bells” by the Singing Dogs. Here, respondents made “Last Christmas” No. 5 and “Do They Know It’s Christmas” No. 2. There were also a handful of rock-leaning titles—“Fairytale of New York” by the Pogues & Kirsty MacColl, “Merry Xmas Everybody” by Slade, “I Wish It Could Be Christmas Everyday” by Wizzard—that would be pretty hip if they were on Christmas radio in the U.S.

Doing music testing for more than 15 years, one sees that a certain handful of songs remain unsinkable, but “Sweet Home Alabama” and “Don’t Stop Believin’” still manage to show both preference and burn from listeners. I’ve always thought of that as a relatively benign and considered reaction. But if listeners are describing that as “irritation,” then programmers should take note. It’s not unlike current CHR where being tagged for repetition by listeners became more than a badge of good programming around the time power rotation stopped being 85 times a week and grew to 124 times.

“All I Want For Christmas” also has the burden of having to represent almost the entire Christmas genre for the last 25 years. As one of the few new Christmas songs allowed to exist at holiday radio, it takes on roughly the same onus as the Spin Doctors, Kings of Leon, the Killers, or Imagine Dragons, the one rock band that Top 40 allows to break through at a given time, before burn and backlash set in.

Then there’s the Spector sound itself. Ever since “All I Want For Christmas Is You,” a combination of that sound and swinging ‘60s MOR (much of it made by the same studio musicians at the time anyway) has become a sort of musical shorthand for the era, especially at holiday time. “Christmas (Baby Please Come Home)” is now a staple on new holiday albums. The closest thing to a new holiday song currently accepted by the big-market U.S. outlets is Kelly Clarkson’s “Underneath The Tree,” and that one is a Spector homage as well.

In Canada, things are slightly different. Led by CHFI Toronto, one of AC radio’s most cutting-edge stations over the last decade, there are a few more recent songs, and a few more songs that aren’t MOR-era standards. Some of that is a function of Canadian content. Justin Bieber’s “Mistletoe” never took at AC here—even though the format now plays several Bieber songs. But it is an accepted part of the canon in Canada. Even among Canadian titles, however, many of the new songs are Spectoresque.

There’s probably a separate article waiting to be written about what new songs deserve a place among the relative handful of holiday favorites that dominate the AC format at Christmas. Is “It’s the Most Wonderful Time of the Year” really a peer to “White Christmas” and “The Christmas Song” in the “Great American Songbook”? Or is it just ritual? A happy talisman for what you’d like the holiday season to be?

For now, most holiday programmers regard the typical major-market American holiday station, with its emphasis on the standards and heavy dose of MOR artists, as the right way to program holiday music. Were they even aware of it, they would see the Canadian way as a second choice born of necessity. But as programmers look at the biggest songs—holiday or otherwise—as incapable of burning, they should understand that the audience’s reaction is more complicated.